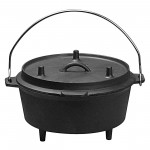 A Dutch oven is any in a family of thick-walled cooking pots, usually made in cast-iron.

They have tight-fitting lids and have been used to cook for hundreds of years.  While this article will talk about European and American historical applications, similar cooking pots were all developed by the Dutch, the Japanese and the Balkans.  Derivative cookware took hold in Britain, America, Australia, and South Africa.

The History of the Dutch oven

The proper Dutch oven has a long history of being a sturdy, utilitarian pot in Europe and through America.

The similar cookware in the style of the Dutch oven was developed in the late 17th Century in both the Netherlands and Britain.  The Dutch used production and manufacturing methods that involved dry sand molds in which to pour metal.  The result was a smoother cooking surface that was more desirable than what the English could produce, and the pots were eventually imported into Britain to satisfy the demand.  Seeing an opportunity, Abraham Darby would later travel to the Netherlands to observe the manufacturing process.  Once he returned to Britain, he filed for a patent and produced the cookware for Britain and the American colonies.

On the other side of the Atlantic, the design of the Dutch oven began to change in order to better suit the needs of the people.  A shallow pot, legs to hold the pot above coals became commonplace, and a flange on the lid allowed people to place hot coals on the top of the pot to evenly cook the contents without getting coal in the food.  Dutch ovens were beloved by colonists and settlers for their durability and versatility.  A single pot could be used for boiling, baking, stews, frying, roasting, and almost any other cooking application.  They became so desirable in fact that people of that time would include their favorite iron cookware in their will in order to ensure that it was bestowed to the desired inheritor.  It’s no surprise, then, that Dutch ovens were carried into the westward expansion by rugged pioneers like those in the Lewis and Clark expedition, mountain men, and cattle drivers.

In keeping with the pioneering spirit, Dutch ovens are great for camping and the outdoors.  Often, a Dutch oven made for camping will include features like tripod legs, wire bail handle, and a concaved lid to place hot coals on top for an even internal temperature.  You can even use one of these sturdy pots for true baking, producing great foods and sides like biscuits, cakes, breads, pizzas, and pies.  Using smaller insert baking pans, you can rotate out finished foods and keep baking or start on uncooked dishes.  Some models will allow for stacking to conserve heat, and may go as high as 5 or 6 pots atop one another.

The Dutch oven was a valuable piece of equipment for its versatility.  If need be, one could literally cook every meal in one of these durable pots.  To demonstrate that point, five recipes to carry you throughout the day are included here. 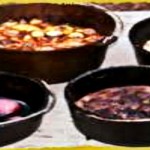 If you’re looking for more recipes, check out these great resources:

Dutch Oven Dude: The quintessential Dutch oven enthusiast, this site is full of recipes for your Dutch oven.  http://www.dutchovendude.com/dutch-oven-recipes.asp

The Blog at Iron Cooker: A great resource for Dutch oven recipes, outdoor life, cast-iron care, and a retailer for several types of Dutch oven.  http://www.ironcooker.com/blog/

Dutch Oven Mania: These people love Dutch ovens!  Find a number of great recipes, guides to clean and maintain your Dutch oven, and advice on what to look for in a Dutch oven.  http://www.dutchovenmania.com/dutch-oven-recipes.html

Depending on how the Dutch oven is manufactured, you may need to keep in mind some tips for keeping your pot clean.

Clean your bare cast-iron Dutch oven like you would any other cast-iron cookware: using a brush and boiling water.  It’s best to use very little or, preferably, no dish soap.  Once it’s dried, apply a thin layer of cooking oil to prevent rusting and store your Dutch oven in a clean, dry place.  Leave the lid ajar for air circulation so you can avoid the smell and taste of rancid oil.  You can also use a newspaper or dry paper towel to wick away any of the ambient moisture.

Enameled ovens don’t need to be seasoned before they’re used.  Remember that enameling is best suited for water-based heat, which means you should avoid deep-frying.  Clean it like you would you ordinary cookware—some brands can be put in the dishwater.

There are some really great photographers whose pictures were too great to pass up.  Thanks to these blogs for beautifying this lens. 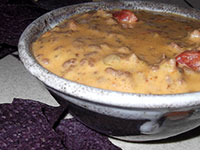 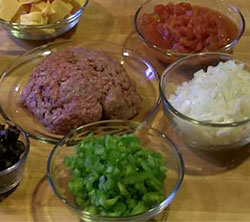 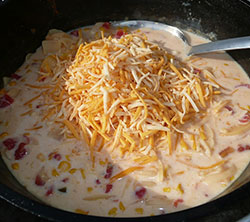