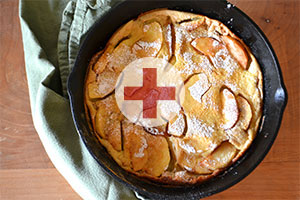 If you are like us, you have never met a pancake that you didn’t like. We have been feasting on variations of pancakes our whole lives, and they were all great. But, once we tasted this fluffy apple pancake cooked with a cast iron skillet, we began to view pancakes in a whole new light. Quite literally a cake in a pan, this delectable apple delight is a cozy campfire breakfast for two.

You will know that your cast iron skillet is perfectly preheated and ready to work its magic on the batter when a drop of water on the surface sizzles and evaporates immediately.

Whether you are cooking in the great outdoors or in the comforts of home, these decadent, cast iron cooked apple pancakes are guaranteed warm hearts and bellies. Preparing them is simple and the results will become a family favorite.