If you’re a frequent reader, you know that we’re very enthusiastic about cast iron.  But for the uninitiated, it’s easy to wonder what place cast iron cookware has in a world of microwaves and Teflon.  Why should you want to shop for a cast iron skillet when there are so many other options out there?

For our readers who are already cast iron users, we’re aiming to give you some new tidbit that you can be excited about.  And for those who aren’t—here are the big 4 reasons why we love cast iron cookware! 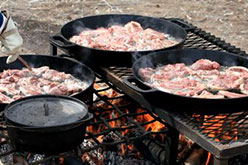 Cast iron skillets are a trustworthy, durable piece of equipment whether you’re cooking in the kitchen or over a campfire.  Unlike other treated pans, a cast iron skillet will endure exposure to open flame and it will distribute the uneven heat to reduce hot spots.  Put them on the stove top, in the oven, and even atop a campfire.  This is one of the only types of pans that lets you sear a delicious cut of meat or fresh vegetables on the range and then finish by evenly cooking in the oven.

If you’re wondering about some specific applications, a cast iron skillet is a uniquely suited vessel for cooking your favorite deep-dish pizzas.  That’s because the evenly distributed heating and tolerance for very high temperatures will get pizza dough deliciously browned while all of the great fillings and toppings are cooked through. 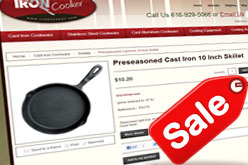 2. Get Your Money’s Worth

Cast iron pans are remarkably affordable, and you can usually find one below $25.  Other pans may cost that much on up to hundreds of dollars for a single piece!  And how often will you need to replace them?

A cast iron pan can last for generations.  Where nonstick coating wears off of other pans and copper may corrode and turn strange colors, cast iron skillets season over time and only darkens as the slick coating builds up. Truly, cast iron is one of the most versatile cooking materials around, and you’ll be able to use it for anything from breakfast to dessert! 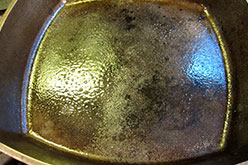 Well-seasoned cast iron is super slick, which means you won’t need to use as much oil as you would in other pans just to keep food from sticking.  Even a non-stick pan will call for using oils, and as the coating wears off, you’ll actually be using more cooking oil in your food over time.  The opposite is true with cast iron—the more you use it, the more the coating accumulates.

And what happens to that non-stick coating when it sloughs off?  Where’s it going?  It seeps into the food that you’re preparing.  Not only does case iron not contain those dangerous substances, but it actually fortifies your foods with additional iron.  That’s great for your health, and especially for ladies. 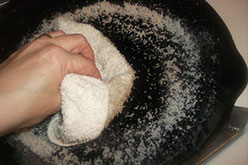 I’ll put it flatly: cast iron doesn’t even need to be washed.  To clean a skillet, just pour in some salt and use it as an abrasive scrub to remove any stray food particles.  After that, you can just wipe it with a cloth.

You can put it under some water if you’d like, but be careful to keep your pan very dry in storage to keep it from rusting.  Any soap is a big mistake—it’ll ruin that great seasoning you’ve been building up for so long.

Did you learn anything about our favorite cookware in this post?  Did I miss any cool facts?  If you’ve got something more to add or you found out something new in this post, tell us about it in the comments below!