Soda bread is quick-rising bread often made with baking soda, which sets it apart from the more common yeast-rising bread.  Traditional soda bread is made with flour, bread soda, salt, and buttermilk.  The lactic acid reacts with the alkaline soda, and little bubbles full of carbon dioxide form in the dough.  It’s a sort of synthetic edible, made by and for people who were hungry and had no time to waste. 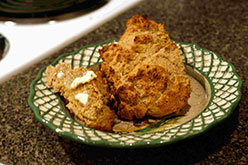 There are many takes on soda bread in Ireland.  One method avoids gluten and embraces a more delicate texture.  For that, cake or pastry flour is used instead of bread pastry to keep the glutens in check, and some recipes will go with a live yogurt—or even a stout beer—instead of buttermilk to react with the soda.  It takes only the tiniest bit of mixing—kneading the dough is out of the question.

In Ulster, wholemeal flour gets used, and the locals distinguish between a savory variety and a sweetened variety, called wheaten bread.  This recipe gets duplicated in southern Ireland as well and called “brown soda.”

Another method is to form it into farls, made by rolling out bread dough and folding it in on itself twice.  These are also called “griddle cakes”, “griddle bread”, or “soda farls”.  These are cooked on the griddle or a flatter shape and split into four sections.

Your Dutch Over Version

What have we learned?  That soda bread comes in all shapes, sizes, and compositions—but it’s got to be flour leavened with soda and some kind of acid.  Let’s see how we can do!

Did you like this recipe?  Are you looking for more great recipes for St. Patrick’s day?  Check out our Recipe Slam going on over at the Ironcooker Facebook page!  And don’t forget to comment if you’ve tried this festive recipe!

Thanks to Dutch Oven Dude for a great and festive recipe!