1 large onion cut up any you want.

4 to 6 cloves of garlic peeled but not chopped

Place all of the above ingredients in a cast iron Dutch oven over low heat.Put the lid in place and let it cook turning only every so often to keep one spot from getting too brown. I cooked mine about five hours turning it 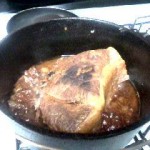 occasionally.Remove the roast from the drippings which should be nice and brown by now.Place it on a plate. Add a little water to the drippings to make enough gravy. Turn the temperature up till the drippings begin to simmer.Mix cornstarch with water and use as a thickener. Add the slurry very slowly stirring constantly to prevent it from lumping. When the gravy is the right consistency you will know. Slice your roast across the grain and slip it back into the gravy.

Serve with mashed potatoes or rice and a veggie.